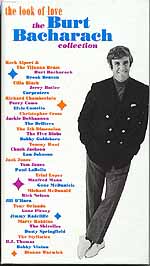 A long overdue resurgence of interest in the music of Burt Bacharach and Hal David is bringing some classic songs to the attention of a whole new generation. Fueled by the recent “Space-Age Bachelor Pad” music fad, the songs have been featured in recent hit movies such as Austin Powers: International Man of Mystery and My Best Friend’s Wedding, as well as tributes from bands such as Blur and Oasis, collaborations with Elvis Costello, and last year’s tribute special on TNT, One Amazing Night, recorded at the Hammerstein Ballroom in New York City, and also available on video and CD.

The pinnacle of the current Bacharach revival would have to be “The Look of Love: The Burt Bacharach Collection,” the recently released three-CD set from Rhino Records (Rhino R2 75339), comprising 75 of Bacharach’s best known songs, most of them composed with lyricist Hal David. All of the hits you expect are here, beginning in 1957 with Marty Robbin’s recording of “The Story of My Life,” progressing through the recordings with Dionne Warwick, Dusty Springfield, B. J. Thomas, and finishing up in 1996 with “God Give Me Strength,” written and recorded with Elvis Costello for the film Grace of My Heart.

This release is in the form of a folio-style boxed set with a deluxe booklet containing essays on Bacharach, lyricist Hal David, and Dionne Warwick, as well as extensive notes for each recording and a concluding essay detailing the production techniques and studios used for the recordings. There are frequent insights into the dynamic between Bacharach/David, and Dionne Warwick, who began their association by volunteering to sing demos for the two and quickly became an indispensable member of the team, able to effortlessly sing the most complex melodies and timings that Bacharach could come up with. Warwick of course went on to have a long series of hit records by Bacharach/David, earning Grammys along the way and in the process forever changing the musical consciousness of my generation with songs like “I Say A Little Prayer,” “Do You Know the Way to San Jose,” and “Walk On By.”

The recordings are either the most well known versions, or the first artist to record the song and achieve some success with it, such as with “A House Is Not A Home,” presented here in the 1964 recording by Brook Benton from the film of the same name, which starred Shelley Winters and quickly sank into obscurity, but the song lives on with many recorded versions. Alec Cumming in the release notes states “there’s no arguably definitive version,” but I’d have to disagree. For me it’s Luther Vandross’ 1981 version on the album “Never Too Much.” It’s seven minutes long and perhaps a bit overwrought, but when he sings it, you really feel it. Vandross also lends a special touch to the “One Special Night” soundtrack CD, contributing a nice medley version of “The Windows of the World” and “What the World Needs Now.”(see review)

Another example is 1966’s “Alfie,” from the Michael Caine film of the same name, represented here by the original recording by British singer Cilla Black. The filmmakers turned down her version for inclusion on the soundtrack, and the subsequent American release of the film featured a version by Cher. Dionne Warwick re-recorded the song a year later with Burt in New York, although she didn’t want to do it. Her’s was the version you probably remember.

The hits weren’t confined to the ‘60s and ‘70s. Burt teamed up in the ‘80s with lyricist Carol Bayer Sager to produce several number one hits such as “Arthur’s Theme (Best That You Can Do)”, “On My Own,” the duet with Patti LaBelle and Michael McDonald, and “That’s What Friends Are For,” which was Dionne Warwick’s biggest hit ever.

Anyone who was born by 1960 knows these songs, and takes them for granted. They were always there, always great. But go back and take another listen. Really listen, and you will discover a new respect for these songs, as well as the singers who were brave enough to tackle them. Go back and listen to Warwick’s rendition of “Promises, Promises” and really concentrate on the vocals, and be amazed at the complexity of it and how she just nails it, as she does with the song “Check-Out Time,” perhaps one of the most obscure pop melodies ever written. And if you think a song like “Alfie” is a simple song, and easy to sing, listen to Cilla Black’s version presented here, who to my ears simply can’t hack it, sounding like a parrot mimicking it’s master (in this case, the Master is Dionne Warwick).

It’s important to remember that the Bacharach/David song writing team was hitting it’s stride at the start of the British Invasion, and groups like The Beatles and The Rolling Stones were revolutionizing the music scene, but the Brits had to share the top of the charts throughout the 60’s with the many hits of Bacharach and David. Quoting Alec Cumming from the liner notes again, “Maybe it was their lack of concern about the musical fads of the day that gave the records they produced a sound that remains fresh 30 years later.” And perhaps more to the point is this quote from Hal David himself: “I was certainly aware of the young people of the ’60s and the ’50s, but I don’t think in terms of ’am I writing for this age group or that age group?’ I wrote the way I wrote. I didn’t write in the rock idiom. Whatever I was, I was.”

What more could an Iconoclast ask for? 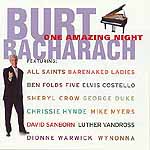 Moving out of the realm of nostalgia, we have One Amazing Night (N2K-10008), the soundtrack recording from the Turner Network Television special from 1998, which I missed of course, being on the road all the time, but it is available on video. I’m going to write about the music not having seen the video. Here we have all new versions of some classic songs, performed by artists who revere them, and in the process set some new standards. For starters, Sheryl Crow proves once and for all that she really can sing as she belts out “One Less Bell to Answer” without much subtlety, but a hell of a lot of heart. Mike Myers does “What’s New Pussycat?,” a song that could only ever really be done by Tom Jones, but Myers’ performance is surprisingly good, especially without the benefit of whatever sight gags were going on during the live performance.

Chrissie Hynde does a decent job with a medley of “Baby It’s You/ Message to Michael,” Barenaked Ladies do a superbly lush version of “Close to You,” and Luther Vandross does a stirring medley of “The Windows of the World/ What the World Needs Now.” In the former, a song originally about the Vietnam War, Vandross omits the middle two verses of the song and in the process, comes up with a haunting and timeless plea for some kind of sanity in this world. He segues into a very up tempo, very ’90’s version of the latter.

Dionne Warwick can’t hit the high notes any more, but she can still make the most of the songs that made her famous, doing a crowd pleasing medley of “Walk On By/ I Say a Little Prayer/ Do You Know The Way To San Jose” near the end of the show.

For me the real standout here is Wynonna’s killer version of “Anyone Who Had a Heart.” I’ve always been a sucker for torch songs, and this one pushes all of my buttons, with it’s spare and subtle arrangement, focussing all attention on the emotion of the song.

The conclusion of the CD is the Master himself, doing his favorite song, “Alfie,” in his breathless singing voice that sounds better than ever at 70. His performances of his own songs were always an indulgence (albeit a pleasureable one), but this sounds perfect as the highlight of a celebration of this great artist’s career.