It was a dark and stormy night. Literally. It was about 10 p.m. Sunday night on Interstate 78 in Pennsylvania, between Bethlehem and Easton. It had been raining on me all day. I was finishing up a 2400 mile run from Nogales, AZ to Carlstadt, NJ and I was about 60 miles from my destination, where I hoped to find a quiet place to sleep for the night before delivering on Monday morning. I was tired from driving on the Pennsylvania Turnpike. I consider it a difficult and dangerous road, especially at night and/or in the rain. I was starting to relax as I neared the New Jersey line and the traffic had thinned considerably, although it was still raining. When people drive at night, they depend on light scatter on the dry pavement to help them see what their headlights are not shining directly on, providing a kind of peripheral vision. When the road is wet, there is no light scatter, and the road becomes somewhat invisible and all you see is what your headlights shine directly on. Another thing we depend on is the logic of the world working correctly. While we may not be prepared for the unexpected, when we do see it, it makes some kind of sense. But when the impossible happens, something totally outside "the rules," our brains pause to consider it.

It was in exactly such a pause I found myself, trying to figure out exactly what was in the road in front of me, emerging rapidly from the misty rain. It went something like "what?... something in the road... it's a car... is it stalled or just going slow with no lights on?... no, it is coming AT me... STOP!!!!.... BAM! That took about 3 seconds from start to finish.

What I comprehended in that 3 seconds was that a small red car which I thought was a Ford Tempo had materialized coming at me, apparently from across the median, although it was rolling rather straight at me. And oh yeah, did I ever hit it head on. I was standing on the brake pedal at the time, but I doubt I had lost much speed in the instant before impact. The actual moment of impact seemed rather like slow motion to me, with a tremendous slam and everything in the cab flew forward and up. I felt I was running over the top of the car with my right front wheel, and a burst of flames spread across the right side of my cab as I "went over." I remember thinking "that was from the gas in the car..." and "whoever is in that car is dead." I was still sliding, standing on the brake. I knew I was headed for the median, and concerned I would cross it and come up into oncoming traffic. When I finally stopped, I could not see where I was, because the hood had popped open, and there was smoke everywhere.

I punched in the emergency code on my truck phone to notify the company. I didn't bother with 911. People were stopping along both sides of the highway and most people these days have cell phones. I assumed there were dozens of calls to 911. I jumped out of the truck and ran around to the other side to see if I was still on fire. There was smoke, but I didn't see obvious flames. I went back inside the cab and started grabbing for a few personal items that I wanted to protect in case I did have to "abandon ship." The phone was ringing and as I started answering it, someone came up and shouted "get out, you're on fire!" I told the operator I couldn't talk to her because my truck was on fire and I hung up. I wasn't all that worried about the fire, because diesel is not very flammable, but I also knew that once it got really going, it would be out of control quickly. So I took what I could carry to the side of the road some distance away while an onlooker used the truck's fire extinguisher to put out whatever fire there was. Unfortunately, I left the door open and the interior and the rest of my things got a coating of powder from the extinguisher. 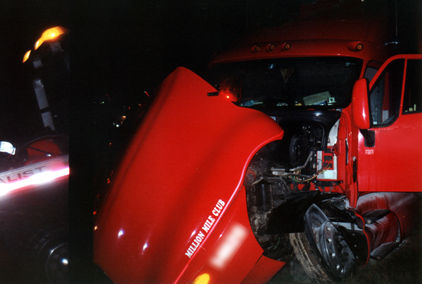 The remains of the car were some distance behind me, and it was very dark and still raining. I didn't go back there at first, because, well, what could I do? Traffic was completely stopped, there was debris all over the road, and people swarming over what was left of the car. It seemed that the rescue squad arrived very quickly. They must have been stationed somewhere nearby. About that time someone told me they thought the car was being towed and had gotten loose. That suddenly made sense out of what had happened, and I stopped worrying that I had killed someone. The paramedics ran past me to find "the victims", and they combed the hillside around the crash for some time before an experienced Pennsylvania Trooper arrived, assessed the scene, and went and felt the engine of the car and pronounced it "cold." No victims. No owner either. Whoever lost it either didn't know it, didn't want to admit it, or couldn't get back to the scene due to the traffic. At that point everything de-escalated to a cleanup and I was whisked away to a motel by the accident adjuster sent by my company. 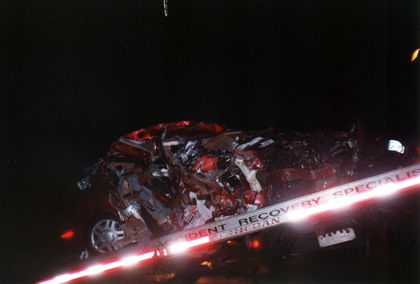 Subsequently I told this story at a driver's monthly meeting at our company headquarters. It turns out that this was the fourth "something coming loose" accident we had experienced in the same month. There was a lot of discussion about accidents, their causes, and their cost. A statistic was brought up which I found quite depressing, and it was that while experienced drivers have far fewer accidents than less experienced drivers, they tend to have much more severe accidents. It is as if you get past the small stuff, only to be "struck by lightning," so to speak. It's important not to think that you're going to have an accident eventually no matter how hard you try not to. Sometimes it comes down to just plain bad luck. In a way, I'm glad this happened to me, because if I hadn't "taken the bullet," it might have been another car that hit this runaway, and then there most likely would have been deadly consequences. 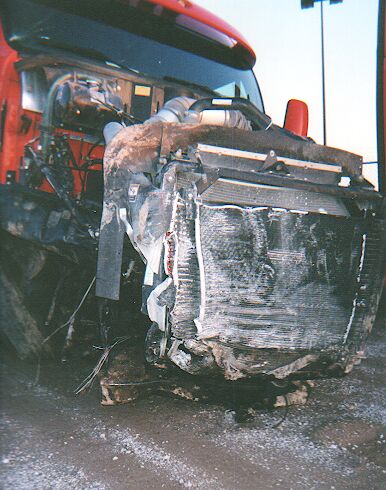 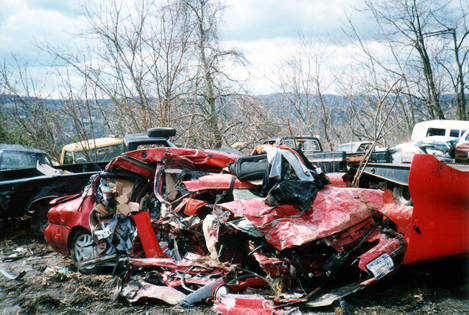 Although this accident happened on March 31, 2002, as of the date of this writing I still don't know who's car it was or what the circumstances were. The accident report has not been made available to me, only speculation that it was probably someone who was moving, based on the contents of the car. 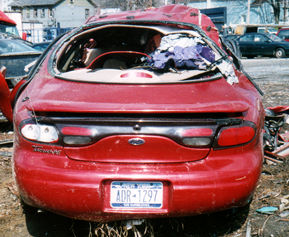